“A German philosopher once wrote that he who fights monsters must take care that he doesn’t become one himself.”

Scorpia Phas dogged Alex Rider for most of his life. They killed his parents, they did their best to con Alex into turning traitor, and they just keep coming back with more power. Now the world’s most dangerous terrorist organization is playing with fire in the world’s most combustible land: the Middle East. No one knows Scorpia like Alex. And no one knows how best to get to Alex like Scorpia. Until now.

The chases have never been more intense, the fights more treacherous, or the risks so perilous to mankind. And this time, Alex won’t get away.

In my opinion Scorpia Rising may be the best novel in a long and excellent series. The gadgetry has always been well thought out, the twists and the suspense is brilliant and the emotional aspects of the series is astounding. To convincingly portray how a teenage kid abused by so many people into becoming a hardened weapon is emotionally affected is superb.

When I read it earlier this year I was blown away. For me coming to the end of a series I have appreciated is always gut wrenching to a degree. To know that the series is over, that that’s the end, it feels like the book with its character has died even though they may live on. And for a time I believed the ending was not satisfying. And yet now I truly believe this was a completely satisfying ending. Of all the novels in the series this will stand as my favourite. This is not only because it has a great storyline and wraps everything up nicely leaving the reader to decide in their own minds how the story truly ends but also because of how emotional Scorpia Rising is. It is the most emotional of all the novels and when I read something so emotional it reads like one of the best stories.

“You’re my closest friend and you’re thousands of miles away.”

“Inside every fat man, there’s a thin man trying to get out.” (Keep an eye out for Smithers)

“He had tattooed all of the names of the men he had killed on his body…unfortunately he had run out of room.”

“You couldn’t trust anyone or anything that belonged to the world of espionage.”

“Death is the same for the one who dies.”

“To enjoy something fully, you had to own it.”

“And what of the vicar? The word sat at the top of the page, underlined. That would suggest some sort of operation involving religion, but frankly, church was the last place you would expect to find anyone from Scorpia.”

Nowhere is safe from Scorpia Rising . . . 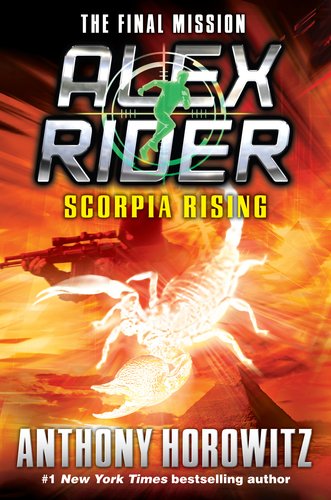