“No matter what dimension you’re in, there’s a big-headed male trying to take over the world.”

Ten thousand years ago, humans and fairies fought a great battle for the magical island of Ireland. When it became clear that they could not win, all of the faries moved below ground—all except for the 8th family, the demons. Rather than surrender, they used a magical time spell to take their colony out of time and into Limbo. There they have lived for decades, planning their violent revenge on humans.

Now the time spell is unraveling, and demons are beginning to materialize without warning on Earth. If humans were to find out about them, all faeries would be exposed. To protect themselves, the faries must predict when the next demon will materialize. But in order to do so, they will have to decipher temporal equations so complicated, even a great brain like Foaly can’t understand them. But he knows someone who can: Artemis Fowl.

So when a confused and frightened demon imp pops appears in a Sicilian theater, Artemis is there to meet him. But he is not alone. Someone else has unlocked the secrets of the fairy world and managed to solve complex mathematical problems that only a genius could. And she is only twelve years old…

While I very much love this series, I had found it difficult to finish this book when I read it. I got half way through and just stopped, which is weird because this is a great series.
But I do feel that there was just a little too much going on for me, and a lot of new characters.
And, on a personal side, I didn’t at all enjoy Minerva. She didn’t even grow on me like characters usually do.
But there are some interesting developments that are key in book too and definitely worth the read.

“Really, I’m trying to care, Artemis, really. But I thought it was all supposed to be over when the fat lady sings. Well, she’s singing, but it doesn’t appear to be over”

“What’s that supposed to mean? A wolf’s head on a stick. Big wolf barbecue tonight? Bring your own wolf?”

“Everyone says that I have no sense of humor, then I construct a perfectly sound pun around a well-known psychological condition, and it is ignored.”

“Relax, Mr. Diggums. Have another nettle beer, or some spring water.” The commander took two bottles from the cooler and offered one to Mulch.
Mulch studied the label. “Derrier? No thanks. You know how they put the bubbles in this stuff?”
Vinyaya’s mouth twitched with the ghost of a smile. “I thought it was naturally carbonated.”
“Yeah, that’s what I thought until I got a prison job at the Derrier plant. They employ every dwarf in the Deeps. They made us sign confidentiality contracts.”
Vinyaya was hooked. “So go on, tell me. How do they get the bubbles in?”
Mulch tapped his nose. “Can’t say. Breach of contract. All I can say is it involves a huge vat of water and several dwarfs using our …eh” Mulch pointed to his rear end-“… natural talents.”
Vinyaya gingerly replaced her bottle.”

Where to find this book

**Also, if you have a Windows Phone, there is a really good PDF reader app called Bookviser Reader. You can check out their website here. 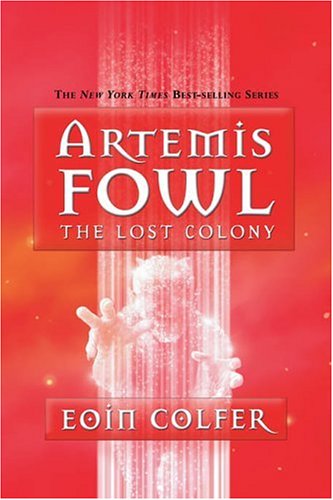 34 thoughts on “Artemis Fowl #5: The Lost Colony by Eoin Colfer”