“This time, when she’d pointed it at me, she’d flicked the safety on. If that wasn’t true love, I don’t know what was.”

From the #1 New York Times bestselling author of Words of Radiance, coauthor of Robert Jordan’s Wheel of Time series, and creator of the internationally bestselling Mistborn Trilogy, Brandon Sanderson presents the second book in the Reckoners series: Firefight, the sequel to the #1 bestseller Steelheart.
They told David it was impossible—that even the Reckoners had never killed a High Epic. Yet, Steelheart—invincible, immortal, unconquerable—is dead. And he died by David’s hand.
Eliminating Steelheart was supposed to make life more simple. Instead, it only made David realize he has questions. Big ones. And there’s no one in Newcago who can give him the answers he needs.
Babylon Restored, the old borough of Manhattan, has possibilities, though. Ruled by the mysterious High Epic, Regalia, David is sure Babylon Restored will lead him to what he needs to find. And while entering another city oppressed by a High Epic despot is a gamble, David’s willing to risk it. Because killing Steelheart left a hole in David’s heart. A hole where his thirst for vengeance once lived. Somehow, he filled that hole with another Epic—Firefight. And he’s willing to go on a quest darker, and more dangerous even, than the fight against Steelheart to find her, and to get his answers.

Personally this was my favorite of the series. In this book, we get to see David’s and Megan’s paths intertwine. We get to see how close they get to each other. We see love. And we see the Reckoners attempt to do another impossible.

The Steelslayer is back, making the Reckoners as reckless as ever!

“You’re like a potato!” I shouted after her. “In a minefield.”
She froze in place. Then she spun on me, her face lit by a half-grown fruit. “A potato,” she said flatly. “That’s the best you can do? Seriously?”
“It makes sense,” I said. “Listen. You’re strolling through a minefield, worried about getting blown up. And then you step on something, and you think, ‘I’m dead.’ But it’s just a potato. And you’re so relieved to find something so wonderful when you expected something so awful. That’s what you are. To me.”
“A potato.”
“Sure. French fries? Mashed potatoes? Who doesn’t like potatoes?”
“Plenty of people. Why can’t I be something sweet, like a cake?”
“Because cake wouldn’t grow in a minefield. Obviously.”
She stared down the hallway at me for a few moments, then sat on an overgrown set of roots.
Sparks. She seemed to be crying. Idiot! I thought at myself, scrambling through the foliage. Romantic. You were supposed to be romantic, you slontze! Potatoes weren’t romantic. I should have gone with a carrot.”

“Don’t do anything stupid.’
‘Don’t worry,’ I whispered over the line, ‘I’m an expert on stupid.’
‘You’re…’
‘Like, I can spot stupidity, because I know it so well. The way an exterminator knows bugs really well, and can spot where they’ve been? I’m like that. A stupidinator.’
‘Never say that word again,’ Prof said.”

“I hadn’t been a nerd, mind you. I’d just been the type of guy who spent a lot of time by himself, focused entirely on a single consuming interest.”

“We want what we can’t have, even when we have no right to demand it.”

“So, uh,” I said, shuffling from one foot to the other, “want to go with me to check up on Obliteration? If you’re not doing anything else important, I mean.”
She cocked her head. “Did you just invite me on a date … to spy on a deadly Epic planning to destroy the city?”
“Well, I don’t have a lot of experience with dating, but I’ve always heard you’re supposed to pick something you know the girl will enjoy…”
She smiled. “Well, let’s get to it then.”

“Or, you know, you could interview the perfectly willing Epic walking beside you.”
I coughed into my hand. “Well, um, this scheme may have started because I was thinking about how to rescue you from your powers. I figured if I knew how long it took, and what was required to hold an Epic … You know. It might help you.”
“Aw,” she said. “That has to be the sweetest way someone has ever told me they were planning to kidnap and imprison me.”

“You can’t immerse yourself in something,” Prof said softly, “without coming to respect it.”

“I wasn’t a nerd, mind you, but I’d spent a lot of my youth studying Epics, so I’d had limited experience with social interaction. I mixed with ordinary people about the same way that a bucket of paint mixed with a bag of gerbils.”

“Well, trust me,” I said. “I’m more intense than I look. I’m intense like a lion is orange.”
“So, like … medium intense? Since a lion is kind of a tannish color?”
“No, they’re orange.” I frowned. “Aren’t they? I’ve never actually seen one.”
“I think tigers are the orange ones,” Mizzy said. “But they’re still only half orange, since they have black stripes. Maybe you should be intense like an orange is orange.”
“Too obvious,” I said. “I’m intense like a lion is tannish.” Did that work? Didn’t exactly slip off the tongue.”

“My name is David Charleston.
I kill people with super powers.”

Step One: find Regalia, then totally explode her. Lots and Lots.

Where to find Firefight 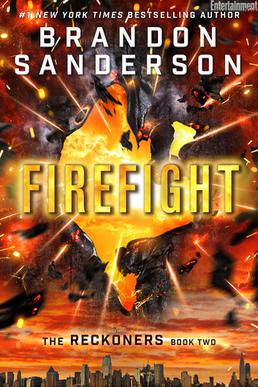